17 matches and 11 goals in European Cups

Bio Note on that period:


Marco van Basten was born on the 31 October 1964 in the Dutch city of Utrecht, where he started his football career at the age of seven. Marco's first club was a local team, UVV. After spending there ten years, he then moved to an other club from Utrecht, Elinkwijk. However, his professional career began in 1981, when seventeen-year-old Marco was spotted by Ajax's scouts. Being aware of great prospects lying ahead, Van Basten agreed to join the famous football club from Amsterdam. Marco's great potential was immediately recognised by Ajax coaches and physiologists. As for a great striker, in his debut (April 3, 1982) Van Basten scored a goal. What's more, in that match he substituted the famous Dutch footballer - Cruyff.

During the next season Marco placed the ball in the net nine times. However, the most important event in 1983 was his debut in the Dutch national team, on the 7th of September, in a match against Iceland. Van Basten scored his first goal for Oranjes only three weeks later, in a very prestigious match against the immemorial opponents, Belgium.

Marco was unrivalled in the Dutch Eredivisie, unstoppable to the defenders and lethal to the goalies. Being four times the top scorer in domestic league, Van Basten also won the Golden Boot Award in 1986 with 37 goals in only 26 matches! During his rip-roaring stay in Ajax Marco scored 151 goals, appearing in 172 games and that outstanding performance was sealed with the victory in the Cup Winner's Cup. As befits for a champion, he found the way to the net in the final itself as well.

Leaving Ajax Amsterdam was now just a question of time. There were plenty of great clubs lining up to sign a deal with Van Basten, including FC Barcelona but Marco decided to move to AC Milan, which was being rebuilt by Italian mogul, Silvio Berlusconi. The transfer was a dream-deal for Via Turati club which paid only 800 000 dollars for the 22-year-old Oranje megastar. In the end, two other Dutch superstars, Ruud Gullit and Frank Rijkaard also became Rossoneri. At that time nobody could expect the trio would rule the European football for the next five years. 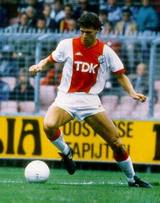